Coming In One Month's Time 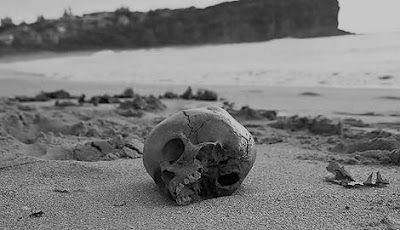 It’s shit being dead.
Which is apt because for the most part that’s what I have to shovel. Effluence, honey, guano, call it what you will but shit is shit and it has to be moved and there’s not much labour to be had else, not when you’re dead; which I am, as I may have mentioned. It’s all right. I wasn’t stretched out for the birds. I didn’t have a funeral. I didn’t die. I was born like it. My da was dead, my ma was dead. I was born dead. I was raised dead. Lots of us were, down here.
There’re a lot of birds. A lot of fish too, as you know. Both in fact. You can’t miss the birds. You won’t have missed the birds. They’ll not have missed you I’d be prepared to bet. Up there on top of the rock, king of the island, high and proud. Everywhere there’re birds. Eggs and meat, feathers and bone, and shit, lots of shit. It’s the basis of our whole way of life. You know that, you just don’t care to think about it. It bleaches your clothes, it makes the steam. It makes the crops grow on the rock. So we shovel it, cut cakes of it, and life goes on. Only not for us because we’re dead, I’m dead. Born like it. Breathing and farting and laughing, but dead.
Only not for much longer, shovelling shit that is. The dead thing kind of sticks though. I done my time. I made my coin. I saved. I’ve spent it too. Three days ago. I’m out of the shit, or will be.
You’ll not like it. They’ll not like it. The picaroons with the tawdry splendour, sword and wand, live today and die tomorrow. Only dead-dead, not dead, not like me. The sustantivo with that inherited trade, that task. The gaity ladies, and more. All so proud, all so frail, all that dignity and station. With the music, and the fish, and the cages. We’re all together-together, my friend. Or you are, not me. All together and looking down, and quite literally from up, on us, on me; on the dead.
But I’m out of the shit, soon. And I’ll be a crawler. Because there’s task and there’s talent, and no one wants to crawl. No one wants to ask questions, no one want to insist on the truth. No one wants to explore, to test, to tease out the truth. It’s base, and it’s crude. To crawl, and I’ll crawl, and I’ll crawl the truth. I’ll ask and I’ll test, and find the truth of it.
I’ll find out who did what, to whom, even why. That’s what a crawler does. And you’ll despise me for it. For seeing to the laws, even as they change, hour on hour.
I’ll be on to you, my friend.
And no one likes a crawler. No likes us when we detect, and trouble.
That’s all right, I won’t give a shit.
Trust me, I’ve shovelled plenty.
Call me Screw. It’s shit being dead; and there’s plenty to go round.
Christmas Tales across ten days.
Starts this 14th December.
Posted by Alan at Wednesday, November 14, 2012
Email ThisBlogThis!Share to TwitterShare to FacebookShare to Pinterest