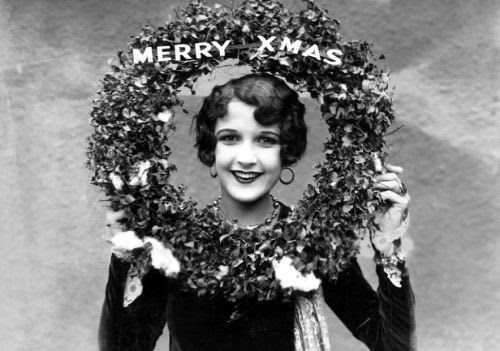 No amount of lipstick makes the bomb look any better, “I’m not convinced summer blush is her colour,” says Mme Roux. There are three types of people in the world; the miserable, the awful, and the dead. Mme Roux has never been happier. “Do you think perhaps tinsel would be over egging the cake?” she wants to know.
“Pudding.”
“I prefer trifle, less stodgy after the full goose and garter belt starter. But tinsel perhaps? Or a small spray of holly?”
Mme Roux loves Christmas. And if no one is around to celebrate it with her then she’ll just go and celebrate it alone. Only she’s not alone. She’s got me. I say dully, “Perhaps mistletoe?”
Mme Roux has no sense of humour. She would claim otherwise having read up on it from a book. Sarcasm isn’t the lowest form of wit as we discovered with the crackers but it’s low enough to limbo under her notice. She says, “There is no mistletoe,” and she is right of course. There’s not much of anything. Every year I visit her and this year we’re about as far from anything as we can be unless you like rubble and flies. We’ve got lots of both. “Which is a shame,” she winks, and it’s just awful, because she is just awful. Mme Roux is what happens when someone is immortal. The person for whom the party never ends, still jumping around when the sun is up, and you just want your bed. I want my bed now.
“Look it’s lovely that you think of me like this,” I say, not meaning a word of it.
“Every year, darling.”
“Every year, Mme Roux.”
“And you always cook a magnificent goose.”
I do. I can’t eat it, but I can cook it. Mme Roux can’t cook but she does like a goose. It’s still there on the table with the skin golden-dead and without any trimmings. Mme Roux loves a Christmas goose, a tradition not for spoiling by being eaten. Being immortal she can experience anything, and well before one lifetime had tired of everything. I’ve not had even the one lifetime yet. Well strictly speaking I’ve had several, just short ones. I’m not even fifty and so my immortality has only extended to not staying down from the accidental. Two weeks ago I fell down a hole. It didn’t kill me, nothing does, but I was still stuck there. I would have been there still had it not been for Christmas, and Mme Roux hunting me up to see to her goose. A world without people but she still finds a goose; and we have to have goose. Which as I say she won't and I can’t eat.
She holds up the gravy boat, “Still feeling saucy?”
I’m really not. Mme Roux has through the last two centuries enjoyed an army of lovers. Now there is just me. She’d like there to be more people because this year has been thin on cards. None to be precise, no people so no post. No postie either. Everyone died, a disease or some monkeys. Or computers rose up, which is more than most people did. There were no zombies and even the middle class escapees from the city that set up their idyll in a smashing country house died since much to their chagrin there were no farmers markets. But there are tins, and you can make trifle from tins, which I have. So we eat trifle.
Of course we eat. I can’t die from hunger but I can get really very hungry. I don’t eat goose though because I get gout. How shit is that? Immortal and I suffer from gout. As the films might have said I don’t dvink vine – because a glass of red would see me in agony for a week unless I find some naproxin. Digging through the rubble of Boots is no fun at all and the labels are all rotten so it’s chuff down the menstrual pain relief and hope for the right one. So fuck goose. And fuck Mme Roux, although by preference rather not. But give it a year of nothing otherwise and even those monkeys there never were would start to look good. Mme Roux has enjoyed an army of lovers, but she believes in conscription.
And then there’s the atom bomb.
Lipstick and now tinsel and wrapped up in a tartan bow. There’s nothing elegant about it. No shiny faced missile of death this. It’s old and fat but it’s what there is and so at a ball for one her dance card is full. I say, “Where exactly does one find an atom bomb?”
“Santa sent it to me.”
“Couldn’t you have just asked for socks?”
“If I want socks,” says Mme Roux, “then I should knit them.”
“Can you knit?”
She can’t, but she can wire bombs. I’m not convinced you can wire up an an atom bomb with a Danger Mouse alarm clock but then what do I know?
“Come along, darling,” she says and I do though I keep hold of the trifle. She has acquired a tandem which means she can cycle without having to pedal. And she doesn’t, but I do, and for such a long way until by nightfall we’re high on the hill and quite far away. She has port from a flask with a cigar from her hat and together we watch as the night becomes day to the mushroom blooming light over what was once Bath.
Then we wait until it snows, because Mme Roux wants a white Christmas. Which is sweet and it’s thoughtful she shared, but you can’t make a snowman from fall out.
Posted by Alan at Thursday, December 05, 2013
Email ThisBlogThis!Share to TwitterShare to FacebookShare to Pinterest